What type of technology do you use? Do you prefer an 8-track tape or an iPod? When it comes to winter tires, much of the public’s perception dates back to when 8-track was the best way to listen to the Bee Gees.

Twenty years ago, winter tires differed from highway tires only in their tread design. We called them snow tires back then and they had big, knobby lugs that were designed to give good traction in deep snow. They had the same rubber compound as regular tires and they weren’t very good on ice, packed snow or wet roads. They were not even very good on dry roads. They really helped in deep or loose snow, but they did a poor job the rest of the time. They were loud and rode hard. You couldn’t wait to get them off in the spring.

Then all-season tires started to come along. All-season tires are really a compromise between summer and winter performance. They have acceptable hot weather ride and tread life, and you can get through mild winter road conditions OK. But there are some really good reasons to consider winter tires.

Modern winter tires do a terrific job in a wide range of winter conditions. First of all, below 45 degrees Fahrenheit, regular tires become hard and inflexible. That means they don’t provide the road grip you need. Even if you don’t live somewhere with a lot of snow, but it still gets below 45 degrees in the winter, you will be safer with winter tires.

In addition, they are specifically designed to more effectively move snow and water. That’s the key to traction on ice, packed snow and wet roads. They use a micro-pore compound that allows the tire to bite into ice and snow. They also use wider grooves that run around the circumference of the tread to expel snow from the tire better. The lugs and grooves on winter tires have a special shape that throws the packed snow out of the tread as the tire turns. The tread is then open when it comes back in contact with the road and can provide good traction.

Winter tires also have a lot of sipes. Sipes are thin slits in the tread. The edge of the sipes grab ice and packed snow to provide tons of traction and to expel water and slush out of the tread. winter tires have a rounder casing to cut into the snow’s surface. The treads on regular summer tires can actually get packed with snow instead and become very slick. winter tires offer 25% to 50% more traction than all-season tires. And when it comes to stopping power, all-season tires take 42% longer to stop than winter tires. Sometimes that’s the difference between getting home safely and spending the night in a snow bank.

Now back when the 8-track was king, you just put snow tires on the drive wheels. That worked out OK because the rubber compound was essentially the same. Now, winter tires provide so much more traction than all-season or summer tires, that there’s a huge difference between the traction at the front and rear ends of the car if you only put winter tires on the drive wheels.

For example: if you take a corner on an icy road and the rear end starts to slide out, essentially the rear is trying to pass the front because it’s going faster. If you have high traction winter tires only on the front, they are going to be much more effective at transferring cornering grip and stopping power to the front wheels. This will actually cause the rear end to whip out even more.

That’s why tire manufactures instruct their dealers that they must install winter tires on the rear wheels as well whenever they put winter tires on the front end of any vehicle. It’s a major safety concern. It’s strongly recommended that winter tires be installed on all four wheels on rear wheel drive vehicles as well. The front tires do most of the steering and braking work – it only makes sense that you provide the front end with the best traction you can.

The province of Quebec in Canada has issued a law requiring all passenger vehicles, taxis and rental cars with Quebec license plates to install a full set of four winter tires between November 15th and April 1. It’s that important.

Look for tires with the symbol of a mountain with a snowflake in it. This means the tire complies with the severe snow standard. All-season tires will have an M&S, for mud and snow, on the sidewall.

So when the temperatures drop below 45 degrees, be sure you have a set of four winter tires for maximum performance in snow, packed snow, ice, wet and dry roads. Your tire professional can help you find the right winter tire for your vehicle and driving needs. 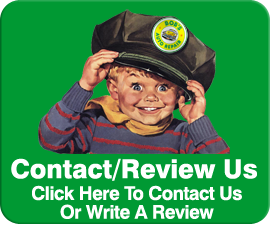